The coworking movement in the UK is migrating out from major Cities as demand grows for professional work spaces in smaller towns and suburbs. The factors influencing this shift include changing working situations, urbanisation and greater internet connectivity. This article focuses on the maturing local scene where remote workers are benefiting from collaborating with other likeminded businesses at inspiring venues.

The job market has become increasingly fragmented with startups and Small or Medium sized Enterprises (SME) booming over the past decade. It’s estimated that 16.8 million people are now employed by SME’s across the UK (1) . Favourable workforce skills, competitive property rates and improved broadband speeds have helped create regional hubs for industries. This is particularly apparent amongst ‘high growth companies’ who employ at least 10 employees and have annual recruitment growth of 20%. The Enterprise Research Centre (2) highlighted that these companies are growing exponentially outside of London and in rural areas. Bristol and Avon for example have a specialist field in television, music and video production while Leeds and its surroundings are a hotspot for financial support services.

Many workers are escaping the commitments of working for an established company altogether and opting for a freelance career. There are an estimated 1.4 million freelancers in the UK which is a growth of 14% over the last decade (3). The allure of greater flexibility and an improved work / life balance are major motivations for this switch in status. It’s also far easier to work remotely today further to technological advancements in cloud storage, lap top and phone coverage. Mature workers and Mums returning to work are fuelling this growth as we live longer and seek solutions to balancing lifestyle changes. Ultimately it’s never been easier or more satisfying to work for yourself. Many freelancers complete contract work for startups or local SME’s further propping up local economies.

Historically major Cities have driven economic growth however some urban infrastructures are now struggling to keep up with an influx of companies and employees. The concentration of tech businesses across Shoreditch and East London has been particularly good news for commercial landlords. Rents have spiralled to unaffordable levels and this has been mirrored across the City in the residential market. It’s estimated by The Guardian that over 3.7 million people in the UK commute for 2 hours or more daily to get to work (4). Companies are increasingly reconsidering location in light of rapid urbanisation. The BBC moved operations to a Salford location from Central London in 2011 in what appeared to be a pioneering move at the time. Major corporations are now encouraging agile working, flexible hours and offsite working for employees to retain talent and keep costs down.

whilst there are limitations in working at cafes and public libraries creating a demand for local professional work spaces. Monthly or weekly Coworking ‘Jelly’ days are thriving across the country enabling home workers to work alongside each other. Frequently they are hosted without charge in cafe’s, bars or public spaces and allow members to casually network and collaborate over projects.

Regional coworking spaces are a more permanent solution and assist in offering conventional office services in inspiring settings. Small can be beautiful and many benefit from close links to the community which are difficult to replicate in Cities. Industry in Chester have discovered the benefits of members collaborating on projects including branding for beer bottles, photography exhibitions, a Hackathon and a radio show. The office has close links with the local University which helps them ” create a workspace that can grow, nurture and retain the local talent in the area.” (5)

The Skiff in Brighton has over 200 members and has developed organically from an initial 20 coworkers in 2008. According to James Forbes, “Members have been involved in the decisions we’ve made to grow and many of them have participated in the details of making the moves happen. This has helped instil a real sense of ownership amongst our members.” The space is careful to support individual workers. “Our most successful members are the ones that are able to sustain their independence on a long term basis. The Skiff’s community provides the social and professional support they need to achieve that.”

MyWorkSpot in Maidenhead have been organising successful fortnightly Jelly events for 6 months. Founder David Johnston commented “the coworking days have averaged 15-20 attendees a time ranging from self-employed freelancers and start-up businesses to employees of major large corporates wanting to work closer to home. More than just providing a nice environment and good coffee we put on lunchtime speakers”. David is now planning the opening of a large permanent space to meet demand which nicely encapsulates how much latent demand there is for coworking space. It’s an exciting time to be a pioneering member of the out of town workspace revolution. 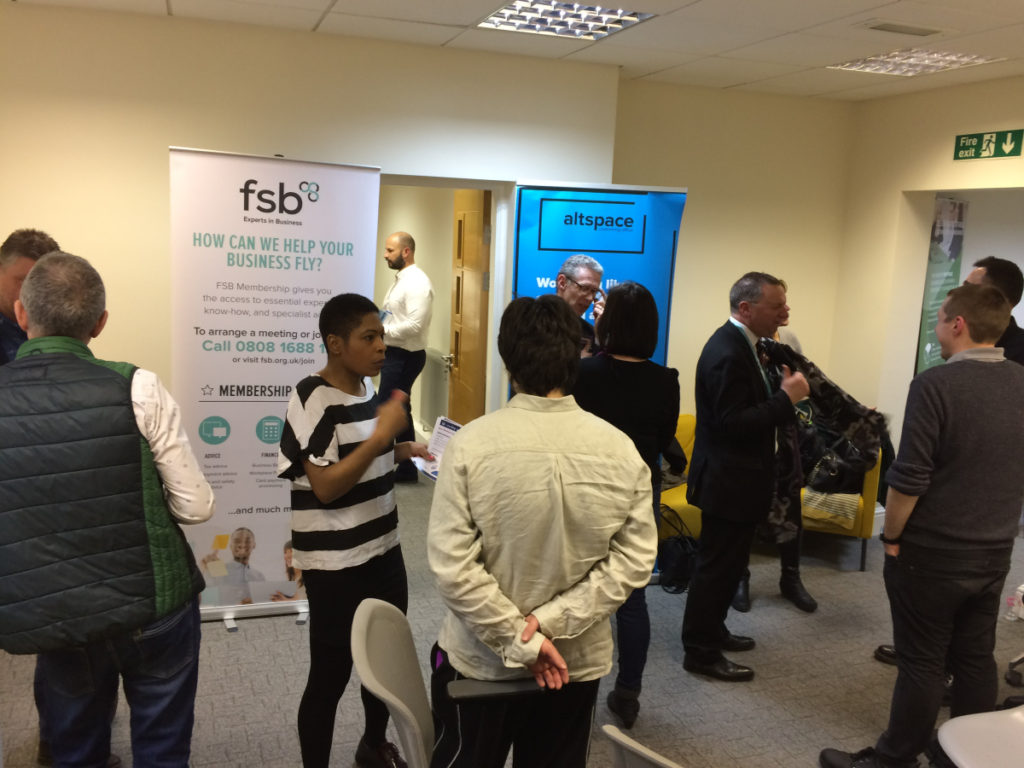 View all posts by admin

Check out our upcoming events

We can offer you a free bike service this Summer 21/9 – Altrincham 30/9 – Warrington Please mail me if you want to book a one hour slot to get your bike fixed up. steve@altspace.club   END_OF_DOCUMENT_TOKEN_TO_BE_REPLACED

This month we welcome the international speaker and trainer Will Kintish to our new FSB meeting.  On Monday from 5pm we host another amazing networking event where we have attracted some premier business speakers over the last year.  The virtual... END_OF_DOCUMENT_TOKEN_TO_BE_REPLACED

Two amazing sites, one awesome community and a virtual competition.  What’s not to like about this year’s Christmas Jumper Day in aid of Save the Children?    Please donate £2 here to join in. END_OF_DOCUMENT_TOKEN_TO_BE_REPLACED

Join the Myerson Real Estate Network for a LIVE 15-minute ‘Coffee Couch catch up’ discussing the impact COVID-19 will have on office trends, office takeaways and how workspaces have adapted in 2020. On the Coffee Couch this week we have... END_OF_DOCUMENT_TOKEN_TO_BE_REPLACED

The altspace coworking office community has grown to sixteen active users since our January launch on Stamford New Road in Altrincham. We offer a unique and flexible service to small businesses, freelancers or anyone needing a hot desk for a... END_OF_DOCUMENT_TOKEN_TO_BE_REPLACED

This Monday we welcomed the Federation of Small Businesses back to altspace coworking office for our monthly networking event.  Twenty six local business people heard an energetic talk from Alex McCann from Altrincham HQ on staying ahead of the competition.... END_OF_DOCUMENT_TOKEN_TO_BE_REPLACED